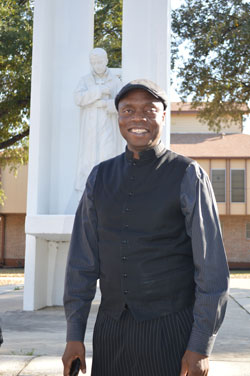 He attended Mumianini Elementary School at Katoka in Kananga. He then commenced his high school academics at the Institute de Beaux Arts, College St. Pius, Minor Seminary, a boarding school, and completed his studies at St. Louis College in the city of Kananga. At the age of 20, he enrolled with the congregation of the Immaculate Heart of Mary and a year later left his family to live in the capital city of Kinshasa where he embarked with the Missionhurst, CICM order. He began his noviciate and pronounced his vows on October 7, 1992. He entered the University of St. Augustine and graduated with a bachelor’s degree in Philosophy in June 2005. Another bachelor’s degree was earned in Philosophy from the Urbanian University in Rome, Italy. During his academic year of 1993-1994, he was elected President of the student body by his students. This same year he was a co-founder of the student body philosophy magazine “Pensée Agissante”, which translates from French to ”Thought that Acts”.

In 1995 he was assigned to the United States to continue his religious missionary formation and on October 10, 1995, he departed the Democratic Republic of Congo. Having arrived at Dulles International Airport in Washington, D. C., he proceeded to Arlington, Virginia for a period of three months. During this time, he learned the English language at Van Ness International Institute of Languages.

He arrived in San Antonio, Texas in January 1996 and continued with his English studies. In the summer of 1996, he worked with Christian Ministry Center in the city of Shreveport, Louisiana. In October 1996, with a limited knowledge of the English language, he began his theological studies at the Oblate School of Theology in San Antonio. He graduated with a Master’s Degree in Theology (Master of Divinity) in May of 2000. During his theological studies, he was involved with different ministries: math tutor at Healy Murphy School, participated in the RCIA program at St. Anthony of Padua, spent a year’s internship at Christ the King Parish in Brownsville, Texas, spent the summer of 1999 at St. Martin de Porres Parish in Mission, Texas, worked with the refugees through Catholic Charities in San Antonio, flew to Puerto Rico to learn the Spanish language in the summer of 1997, attended a Clinical Pastoral Education at Methodist Hospital in Houston, Texas during the summer of 1999 and ultimately became a chaplain with one unit credit.

After his graduation from the Oblate School of Theology in 2000, he relocated in Arlington, Virginia and involved himself with advocacy work in Washington, D.C. with the African Faith and Justice Network thru 2002. He was ordained Deacon in November 2001 at Assumption Seminary in San Antonio, Texas and returned to continue his advocacy work and diaconate ministry at St. Anthony of Padua Parish in Falls Church, Virginia. A year later on June 1, 2002, he was ordained a priest at St. John Berchmans Parish in San Antonio, Texas by Bishop Patrick Zurek.

He returned to the Democratic Republic of Congo to celebrate his first mass with his family and friends. In October 2002, he was appointed Parochial Vicar at Our Lady of Good Counsel Parish in San Antonio, Texas. After an interval of one year and six months, he succeeded Msgr. Dennis Darilek as Pastoral Administrator for the following four years. Father Fidèle proudly became an American citizen in the year 2006. In addition to his ministry as pastoral administrator and pastor he also worked as a chaplain at Methodist Hospital in San Antonio, Texas from 2007 thru 2009. He completed his incardination process with the Archdiocese of San Antonio in 2008 and was appointed Pastor of Our Lady of Good Counsel Parish in June 2008. He started Dikete Education Opportunity Foundation in March 2006 to assist children with educational tuition in his childhood school of Mumianini Elementary School in the Congo and also in two additional elementary schools for girls:  Disangayi and Muoyo Mupeluke. He has successfully planned, organized and been Spiritual Director to 12 pilgrimages to Italy:  Rome, Assisi, Venice, Florence, Padua; Israel/Holy Land, Greece, Portugal/Fatima, Spain, France/Lourdes and Paris. In May 2009, he was elected Dean of the West Urban Deanery by his fellow pastors and was appointed by Archbishop José Gómez to be a member of the Presbyteral Council to the Archbishop and the Personnel Board. He initiated in 2010 a support group for fellow African priests in San Antonio, Texas. In August of 2011, he organized and led Youth Group members to the World Youth Day in Madrid, Spain, the first time in the history of Our Lady of Good Counsel Parish that this has been accomplished.  In the summer of 2012 he led a group of young girls and boys, members of the English choir and altar servers to Washington, DC.

The following are articles written by Father Fidèle:

Father Fidèle is fluent in the following languages: English, Spanish, French, Tetela, Tshiluba, Lingala and has some knowledge of Latin.

On November 2013, after serving for five years as the Dean of West Urban Deanery, he resigned and he is currently serving as Pastor of St. John Berchmans.